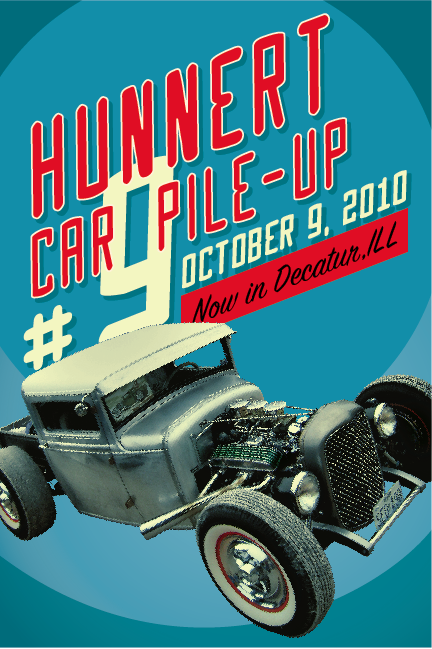 As you know, we had a lot of problems with the Hunnert Car Pileup last year. The problems were a long time coming and we’re lucky they didn’t happen sooner and no one was seriously hurt. These events forced us to think long and hard about what the Pileup is, where it’s going, and where its future path should lead. We’ve always said that if we felt the soul of the Pileup slipping away from us that we would rather stop having the show than see it turn into something we don’t like. After some deep contemplation and heated debates, we’ve decided that we, the traditional hot rod community, are still in control of the Hunnert Car Pileup’s soul and destiny. For now. That means the Pileup will happen in 2010! October 9, to be exact.

The chaos that ensued last year made it clear that we outgrew the Grundy County Speedway & fairgrounds. When 9 football fields are completely full of spectators and there’s a 4 mile backup by noon, it’s a pretty good sign that a location just isn’t big enough. So, we started looking for other locations. We investigated every suggestion on the HAMB, the Chrome Czar forum, and a few others. Our criteria was that the location have sufficient access, including multiple entry/exit points, onto multiple roads, have plenty of hotels nearby, be willing to work with us, have some character, and be available on the 2nd Saturday of October. All of the locations could handle the show cars, but only a few could meet the other criteria, and only one could handle the onslaught of spectators we had in 2009.

The new location of the Hunnert Car Pileup for 2010 is Progress City in Decatur, IL! We’re excited about the new location. It will be a lot like Morris, but a lot bigger and better. It’s not as visually interesting as some of the other sites, but it can handle the crowds, and is big enough that cars won’t be parked on top of each other (so no more complaints about not being able to see cars or get pictures of them!), we’ll have room for more vendors, and will have room for on site cruising. And you won’t have to drive any where near Chicago traffic to get there!

The police, sheriff, site staff and city council are eager to have us there and are working with us to make the entire weekend go smoothly. They are even providing dedicated staff just to handle spectator parking, guaranteeing smooth sailing. Decatur is about 120 miles/ 2.5 hours south of Morris… so it might even be warmer!

We’ve arranged to have the pre/post show parties at a very cool 1800s era opera house called Snapper’s in Clinton, IL (15 minutes away doing the speed limit). We’re working out an arrangement with the town to block off the ENTIRE downtown square for hot rod parking ONLY! There will be great, cheap food, and great bands. The vibe is very much like the Red Cent in Morris, plus they have pool tables. The whole town is into it.

We’ll keep you posted on the bar, hotels, and other details as we work them out.

We are working out a band line up now. Trust us, it’s going to be good!

More good news: We killed the swap meet last year because it was too big of a hassle and we didn’t have the people power to run it. This year, we asked the Bombers Car Club (Peoria, IL) to take over the swap meet and bring it back! They will be handling it 100%.

We hope to see you in October!