Of course we know that for the most part organized drag racing started on the West Coast but not to be denied, the other states caught on quickly.  When the guys back east decided to go drag racing, they really got serious.  Unlike the West Coast where there was good weather almost year round, when it closed in on them, they did what any rabid racer who suffers the dreaded “Nitro Methane In The Blood Disease” would do, they built an INDOOR drag strip.  Yep, that’s right, an indoor drag strip.

In 1962 those crazy guys from Chicago built the “Chicago Area Raceway” – INDOORS.  It was located in the old International Amphitheater at 42nd and Halstead in Chicago Il.  It was built in ’34 as a livestock showplace and in ’68 housed the Democratic Convention and at least one Beatles concert and one Elvis show.  Advertised as the world’s only indoor drag strip, it was open about 2 years  and featured a 440 ft. strip with a 660 ft. shut off and included a pit area.

The United States Auto Club (USAC) sponsored it.  Don’t ask me what they did for ventilation but that’s the way they did it back in the good ole’ days. 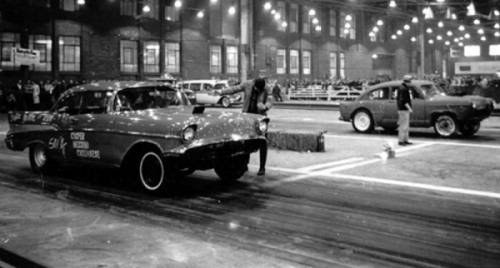