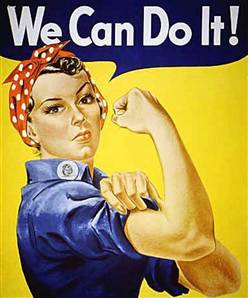 With a red and white bandana in her hair and factory worker uniform sleeves rolled up to reveal her bulging biceps, Rosie the Riveter was painted on a World War II recruitment poster in 1942. But for four decades, the real Rosie the Riveter had no idea she was the woman who inspired it.

Perhaps it was because Geraldine Doyle left her factory job after two weeks – or because she didn’t actually have bulging biceps – that Doyle, who died at 86 years old on Sunday in Lansing, Mich., didn’t know for so long that she was the model for what would became a symbol of women’s empowerment.

Doyle was 17 in 1942 and had been hired as a metal presser at a factor close to her home in Inkster, Mich., to help the war effort, her daughter Stephanie Gregg told the New York Times. One day, a United Press International photographer came to the steelworks factory and took a picture of Doyle leaning over machinery, a red and white polka-dot bandana covering her hair (see the original photo here). Later that year, the government commissioned artist J. Howard Miller to produce morale-boosting posters that would motivate workers and recruit women to join the war workforce. The UPI photo of Doyle, a slender brunette that her daughter calls “a glamour girl,” caught his eye.

Meanwhile, Doyle – a cellist – learned that a worker had injured her hands at the factory, and decided to get a safer job at a soda fountain and bookshop in Ann Arbor.

In 1984, married to a dentist and a mother to five children, Doyle came across an article in former AARP publication Modern Maturity magazine that connected her photo with the wartime poster, which she hadn’t seen before.

“The arched eyebrows, the beautiful lips, the shape of the face – that’s her,” daughter Gregg told the Times. But, she said, “she didn’t have those big muscles. She was busy playing cello.”

Nonetheless, when she saw it, she said, “This is me!” Gregg told the Lansing State Journal.

Rosie the Riveter became a lasting emblem. In the early 1940s, Red Evans and John Jacob Loeb wrote a song named after her. In 1943, the Saturday Evening Post put a Norman Rockwell illustration of another female worker with the name “Rosie” painted on her lunch pail. n 1999, the U.S. Postal Service created a “We Can Do It!” stamp.

For years, Doyle signed Rosie the Riveter t-shirts, posters, and more. While many profited from her image, she never charged a penny to fans, her daughter said.

“She would say that she was the ‘We Can Do It!’ girl,” Gregg told the Lansing State Journal. “She never wanted to take anything away from the other Rosies.”